There are four commonly recognized tidal “zones” based on exposure during tidal periods, wave action and shoreline features. The presence or absence of water, temperature, wave action, variation in salinity (saltiness), exposure to light, and other factors determine what organisms are able to live happily in each zone. In general, physical factors, especially exposure to drying, limit how far up on shore an organism can live. An organism’s lower limit is often determined by competition or predators living in the lower zone.

Because a tidepool may hold water even during a low tide, a pool may provide suitable habitat for organisms that would normally be found in a lower zone. Giant green anemones and hermit crabs, for example, are generally found in the mid and low intertidal, but may be found in tidepools higher up.

Some organisms have a narrow range of tolerance for environmental factors and are found only in one zone, while others have a greater tolerance and are found in several zones.

This area extends from the highest reach of spray and storm waves to the average height of the high tides. It is usually dry, and relatively few types of organisms can live here. Species found in the splash zone might include: small barnacles, periwinkles and ribbed limpets.

This zone includes the area from the average high tide to just below the average sea level (i.e., covered only by the highest tides). Species found in the high intertidal zone might include: acorn barnacles, hermit crabs, shore crabs, black turban snails, aggregating anemones, sea lettuce, and rockweeds.

This zone extends from just below average sea level to the upper limit of the average lowest tides (i.e., it is exposed at low tides-usually twice a day). In a healthy intertidal area, this zone is rich both in diversity and numbers of organisms. There is generally a dense cover of algae, providing food and shelter for many animals. Species found in the middle intertidal zone might include: California mussels, giant green anemone, ochre sea star, black leather chitons, gooseneck barnacles, coralline algae, sea palms, and sponges.

This zone is exposed to the air only at the lowest tides. Species found in the lower intertidal zone might include: gumboot chiton, ochre sea star, kelp crabs, blue top snail, purple sea urchin, feather boa kelp, nudibranchs and sponges.

Subtidal organisms that you are likely to encounter (sometimes washed up on the beach) include bull kelp, many bottom-dwelling invertebrates, and various fish. Sunflower sea stars tend to occur subtidally but occasionally will come up higher into the low tide zone.

Many kinds of birds are likely to been seen in or near the intertidal area, including various gulls, black oystercatchers, cormorants, pigeon guillemots, common murres and brown pelicans. Likewise, you may see mammals such as seals, sea lions, and whales. Please note, if you see a marine mammal on the beach, leave it alone. Marine mammals will often come ashore to rest and can be aggressive if they feel threatened.

Descriptors of the zones are approximations and may vary due to the shape of the shoreline, latitude, and other factors. Similarly, plants and animals don’t always stay in the zones where they are most commonly found. 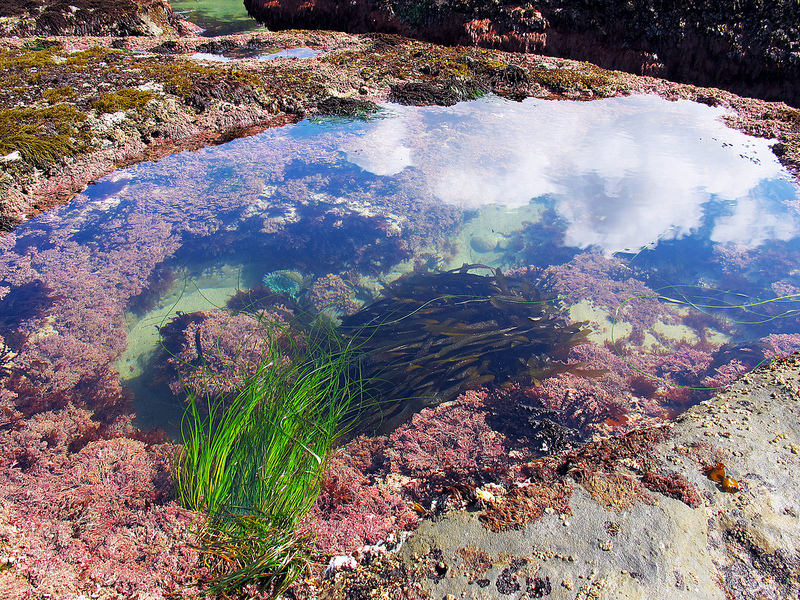