When the sea returns to a barnacle’s home, the barnacle will open the two doors in the center and extend its ten feathery legs beyond the protective walls. Opening and closing at a measured pace, the barnacle’s curved legs sweep the water for its food: plankton and detritus. Find some barnacles still submerged in a quiet tidepool and you’ll be able to watch the graceful dance. 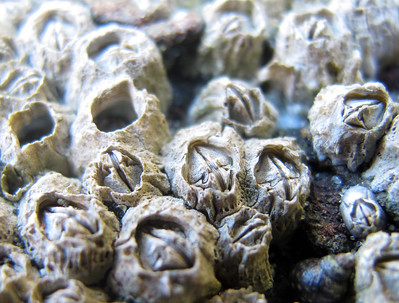 These barnacles may attach to anything hard, including driftwood, mussels, black turban snails and other molluscs—even the backs of crabs.

Oregon’s tidepools are home to several species of barnacles, each with a slightly different texture and door shape. If a patch of barnacles grow long enough and big enough, they’ll crowd each other and be forced to grow upwards only, with each barnacle becoming tall and narrow.

Description: From barely visible to larger than your fist, several kinds of barnacles are found in Oregon tidepools. Each hard white bump is generally volcano-shaped; the texture of the sides is somewhat different for different species, but is usually quite rough. In the recessed “crater” in the center are two tight-fitting shells that are the barnacle’s “doors.”