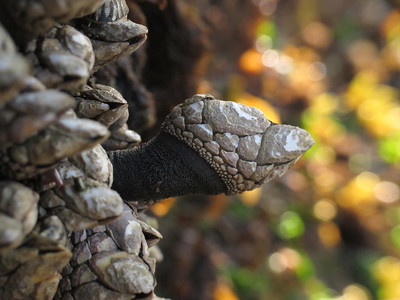 The flexible stalks may be hidden, covered by the hard shells.

Dozens of off-white plates form two shielding halves around the bulk of the gooeseneck (leaf) barnacle’s body; a tough, rubbery stalk connects it to the rock. A great combination in the gooseneck barnacle’s heavy surf habitat: armor and give.

Water currents or cascades will entice the gooseneck barnacle to gape those shielding halves and extend its ten feathery legs to feed on plankton and detritus in the water. The long slits between the halves are parallel to the main water current.

Description: Together acting like gently-cupped hands, dozens of off-white plates form two shielding halves around the bulk of the gooseneck (leaf) barnacle’s body. A tough, brownish, rubbery stalk thicker than your thumb connects the gooseneck barnacle to the rock. Gooseneck barnacles tend to grow in clumps, and individuals in each clump tend to orient the same way.

A relative, the pelagic gooseneck banacle (Lepas sp.) may be found washed up on Oregon's beaches, especially on hard sided debris such as driftwood, floats etc. This species lives on flotsam throughout the world's oceans (it is called a "cosmopolitan" species).

While this specific species is not likely to be a threat, other non-native, invasive species may be. You can help keep the beach clean by (safely) removing human-made debris that washes up. Find information about beach debris on Oregon's shoreline and how you can help out.