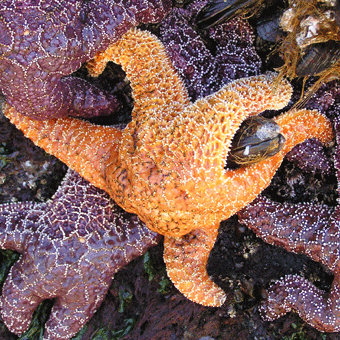 While human bodies age and change in our later decades, sea stars—and most other invertebrates—don’t go through such transformations.

Our common ochre sea stars ("starfish") can survive many years in tidepools by being patient and tough: they cling tightly to the rock and move slowly by using the rows of tube feet on the underside; small plates just under the surface makes their bodies rather hard and a little stiff. The soft tissues between the hard bumps on the back include tiny pinchers that fend off parasites and some potential predators.

Sea stars cannot survive, however, if they’re exposed to air and sun too long, or if they get too warm, or if they’re unable to attach: pulling them off the rocks and/or moving them can end their long lives. “If you pry, it will die.”

How does an ochre sea star eat?

Ochre sea stars have a mouth in the center of the bottom, but a mouth that’s too small to accommodate most of the seastar’s prey. Instead of putting food in its stomach, this sea star pushes its stomach out of the mouth and into, or onto, the prey to digest it. The stomach is pulled back into the sea star’s body when done eating.

Mussels, this sea star’s favorite food, must first be pried open to allow the sea star entry. The mussel is initially stronger than the sea star, but the sea star is more patient: eventually the mussel tires of fighting the sea star and allows the shell to gap enough for the sea star to get inside.