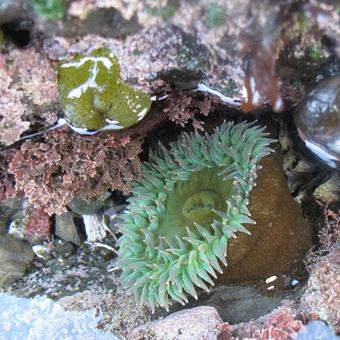 Green sea anemones have single-celled algae living in their tissues. The algae probably have a relatively safe place to live, but the sea anemone may get a good portion of its food from the algae, as well as some camouflage. Anemones living in dark crevasses are paler green.

Poking anemones may cause them to squirt out valuable water they need to stay hydrated during low tide, please observe gently. 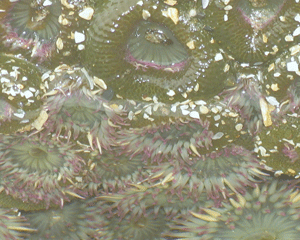 Why are aggregating anemones sometimes packed tightly together? Anemones reproduce by shedding eggs and sperm into the water, or by budding, or by splitting in two—cloning: aggregating anemones are especially good at cloning. A cloning aggregating anemone starts by stretching into a long oval then a long figure 8, eventually dividing into two genetically identical individuals.

Look for the pink-tipped tentacles in an open aggregating anemone while you’re looking for cloning individuals and boundaries between clone colonies. If you're lucky, you may even see the acrorhagi, or specialized tentacles used by this anemone to warn off members of other clones.

Description: Shaped overall like shallow bowls with ultra-thick bottoms attached to the substrate, sea anemones may look more like flowers than like animals—especially the ones that are green. Pointed “petals” around the top rim are stinger-armed tentacles that frame the central disc, the mouth of the animal. The floor of the central disc is smooth with a doughnut-shaped lump in the middle, while the outside of the body, below the tentacles, is usually a darker green and rough, and is often flecked with bits of shell. Many of the intertidal sea anemones you are likely to see in Oregon are olive to bright green (some species have splashes of other colors). Depending on species, age, and environment, some of our tidepool sea anemones can grow up to 10” across (about the size of a dinner plate!).